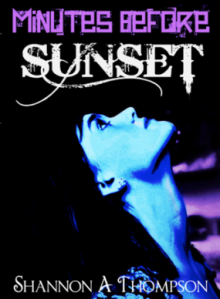 I would like to kindly thank Shannon A Thompson for sending me a copy of her novel, Minutes Before Sunset, to read via Smashwords.

Being quite the fan of young adult (YA) fiction and supernatural stories, I found myself delighted that Shannon’s book covered both of these. Minutes Before Sunset is the first in a trilogy of books that concentrate on a protagonist by the name of Eric Welborn and his ‘Shade’ alter-ego, Shoman, as he battles against the prophecy that looks certain to rule his life.

Eric finds himself the reluctant saviour of his people, the Shades, in their battle against their arch-enemy, the ‘Lights’. As Shoman, the Shade, Eric is hailed as the first descendant and is destined to do battle with his Light counterpart, Darthon. It will be a battle to the death in which only one of them can survive. The pressure is on Eric to be prepared for the battle and come out victorious, yet the thought of having to kill another person (supernatural or not) does not sit well with him.

The book starts off at a quick pace and keeps it up until the end. It is not easy to create a complete supernatural world to readers without finding the story dragged back by back story and exposition, yet Shannon has been able to describe an unknown world of humans with supernatural alter-egos while not letting the pacing of the story suffer for it.

I found myself quickly immersed in the world of both Eric and his Shade identity as Shoman, although there are a wealth of characters to get to know, I never once felt confused or overwhelmed by descriptive dialogue about them. Shannon has deftly mixed back story with present-day action and has allowed both to unfold at a pace that allows the reader to really enjoy both sides of the story.

Even better is the fact that the story is being told from not one perspective, but two. Not only do we see the story unfold from Eric’s point of view, we also see some of the same scenes through the eyes of the book’s second protagonist, Jessica Taylor, a girl who finds herself new to the town of Hayworth and with a secret of her own.

Although Jess makes two friends in the shape of Robb and Crystal, she finds herself drawn to the mysterious Eric Welborn – even if the rest of the school thinks he should be kept at arm’s length. Robb and Crystal try to warn Jess about Eric, knowing his tragic past has caused him to all but isolate himself from the people around him in the ‘human’ world. Yet Jessica finds herself enamoured with Eric and he too finds himself taken aback by how easy he finds it to open up to her.

Both Eric and Jessica have secrets that they are trying desperately to keep from the world, yet their destinies and journeys are more closely linked than either of them could ever have imagined. When human and supernatural worlds collide, what will happen to the two young heroes when they find themselves helpless against their growing need for one another?

Can either of them really outrun their fate?

Will an age-old prophecy dictate what happens to them?

Can they change what already seems to be set in stone?

Minutes Before Sunset is a fun and well-paced read, full of witty dialogue and thrilling action that keeps you entertained the whole way through, especially the final twist which took this reader by surprise. The characters and their situations are believable and gripping and I found myself working my way through this book quickly and enjoying every turn of the page as I did so.

I would recommend that you check this book out if you have not already done so, links to Shannon’s website and her books can be found here:

8 responses to “Book review: Minutes Before Sunset – Shannon A Thompson”

(basically making life into a metaphor)