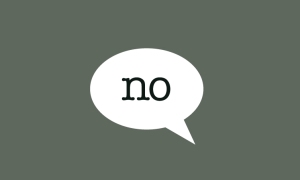 It’s only a simple, two-letter word, so how come it’s so hard to say?

For whatever reason, I have found myself getting stuck in the habit of being a people pleaser and agreeing to things that I don’t actually want to do for the sake of not rocking the boat.

Some people might say that just makes me a decent person, someone who puts the needs and wants of others ahead of their own. Doing that is all well and good until it grinds you down and makes you ill. This is something that I’ve found out recently and, despite numerous people trying to drum it in to me before now, I’ve only recently been taking on board what they’ve been telling me for ages now.

Whether it is my personal or professional life, I have found that agreeing to the demands of everyone around me actually does more harm than good. At the end of the day, saying no to something isn’t the end of the world, so why do the people you turn down act like it is?

Perhaps people become accustomed to you saying yes all the time that it comes as quite a shock when you finally say no. I suppose that’s when all the snarky comments come out about how you’ve got an attitude, or how you’re being selfish etc. 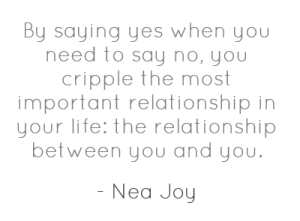 Saying no doesn’t mean that you have an attitude or that you’re being selfish, it just means that you’re doing what is right for you and not necessarily what is most convenient for the people around you. Maybe we have lulled those people around us into a false sense of security and our new found assertiveness might rub them up the wrong way for a while.

There are times when we all have very good reasons for saying no and it shouldn’t be something that we’re afraid of saying to the people around us. Saying no doesn’t make you a bad person, it simply makes you a person who realises that there needs to be more to life than running yourself into the ground for the sake of others. What would happen if you burnt out and were no use to anyone? Those people would still find a way of getting their needs met without you.

So if you feel like saying no to someone, do it. It might seem like a foreign word to you, but you’ll find that, the more you say it, the easier it becomes. It’s a simple word: two letters, one syllable and it’s not as dirty a word as you might think.

Filed under Starting out, Thoughts for Friday

poems, stories, and life from a contemplative corner of the world