Film review: The Woman in Black 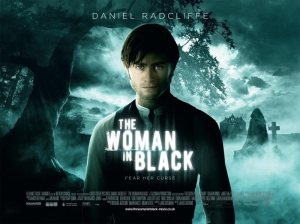 Ok, I am the first to admit that I am probably a little behind the times when it comes to catching newly-released movies and it’s probably been nigh-on eighteen months since this film was released. But what can I say? The cost of going to the cinema these days is exorbitant and the penny-pincher in me would rather wait until a film has come out on DVD before I spend any of my hard-earned money on it.

Not being a huge fan of Harry Potter; I admit that I only bought the DVD because it was cheap – that and I had a voucher for the supermarket that I purchased said DVD from for exactly the same amount of money. So it was a no-risk, win-win for me. I hadn’t actually spent any money purchasing the film and so I didn’t have much to lose by watching it either.

The DVD sat on my shelf for many a month as I neglected it in favor of writing in earnest – and I am a writer, not a film reviewer! 🙂

Last week I plucked the plastic case from my shelf and decided to give the film a viewing, knowing little more than it was meant to be a horror movie.

Rather sadistically, I turned all the lights out and watched the film under the cover of darkness, hoping that it would add to the ‘spooky’ feel that the film’s blurb promised me. Alas, I was to be disappointed; I only jumped once in the whole 90 minutes that the film was on for (it was the part where the woman in black came out of nowhere and screamed at poor Arthur Kipps.)

Even watching the film in the dark failed to add to the fear that horror movies are meant to instill in you. The film had been rated as a 12 – quite tame for this particular genre, and I found it no more scary than a particularly dark episode of Sesame Street. I felt that the lead-up to scenes which were meant to make you jump were slightly obvious and labored – as soon as the screen went dark and the background music died down, it was obvious that something was going to jump out and attempt to scare you.

I can’t criticize the acting, but I do question whether Daniel Radcliffe was the right person to play the lead role of Arthur Kipps. Kipps is meant to be a widowed lawyer who has a young son yet he barely looks old enough to be indulging in sexual practices, let alone have a four year-old boy. I found the presence of such a young-looking actor took something away from the atmospheric nature that the director was likely trying to convey, and that’s a shame as it’s not actually a bad film – more disappointing than anything.

The Woman in Black is a film that promises much yet lacks something integral with its delivery, leaving you with a feeling that something is missing. It’s an entertaining chiller, but hardly like to make you wet your pants with fear. If you’re looking for something terrifying to watch then I think you’ll end up disappointed with this particular film.

poems, stories, and life from a contemplative corner of the world